How to Make Your Own Pyrography Points

Experiment with Nichrome wire to create your own points, whether they're for softwoods, fine work, heavy work, decorative patterns or lettering. 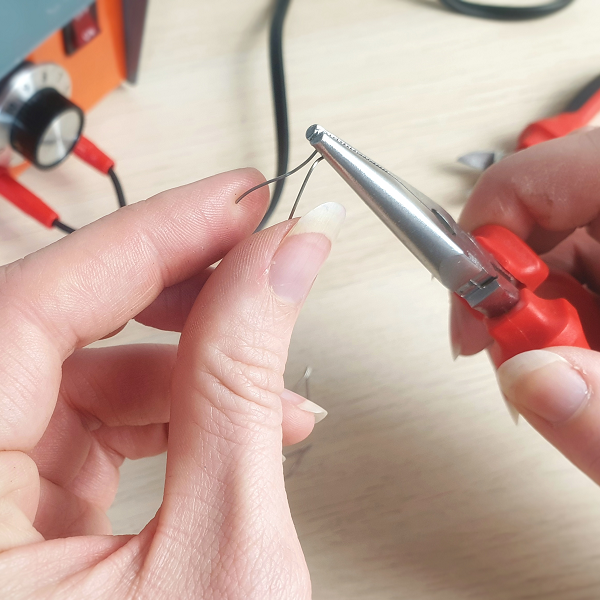 You can purchase the special wire (an alloy of nickel and chromium called Nichrome) in various thicknesses and make your own points. Use only Nichrome wire or you will damage the machine. You will need wire cutters, fine pointed-nose pliers and possibly a small hammer and anvil. The anvil can be improvised using an axe head or large hammer head fixed in a vice. A set of needle files is useful for shaping points. The wire is available in small reels and each reel can make 200 points or more. 26 S.W.G. (Standard Wire Gauge) is the finest and 23 S.W.G. is the thickest wire which we normally supply. Note that the smaller the S.W.G. number is - the thicker is the wire.

To make a standard point, cut off 30mm (1¼”) of 26 S.W.G. wire and bend it in the fingers into a U shape. Fix it into the terminals so it can be securely held by the screw clamps and tighten carefully so as not to strain the terminal supports. Then squeeze the end of the loop with pliers so that the wire touches together at the end for about 3mm (1/8”). This will concentrate the heat at the end. Standard loop points can be made from 26, 25 or 24 SWG. Thicker wire is not recommended and may overload the machine.

The resinous and uneven grain of softwood (pine) is difficult to burn evenly because the normal point tends to dig into the soft parts. A point with a large area of contact will minimize this difficulty. A spoon point can give good results. The point will gum up with burnt resin quickly and a piece of coarse wire wool or a fine wire brush will be useful for cleaning off the deposit.

Standard loop filed or ground down to a needle point. Extremely fine lines can be produced on a hard wood such as boxwood with these points. Hammer the end flat then cut and file or grind to a point. As the point will be very weak, do this while mounted in the pen and be careful not to break it when changing points.

Points for fine lines and feathering

It is difficult to burn straight lines evenly because the point tends to dig into the soft parts of the grain. If a point made from thicker wire such as 23 S.W.G., is hammered flat at the tip and filed to a knife edge profile, lines can be drawn much more evenly. This point is also useful for feathering bird carvings, shading and can produce interesting textures.

More heat is generated in the point if an extra long loop is bent back on itself. These can be made from 23 SWG wire (minimum 40mm length) They are best formed with small pliers while red hot (to make it easier to bend). It is a good idea to squeeze the point really compact whilst red hot, using pliers. It might be thought that the current would be shorted out where the loops touch and this may well happen with a newly made point, but in a short time a coating of oxide will form which insulates the wire and then the point will brighten up visibly.

An alternative heavy duty point can be made by winding the wire around a stout needle held in a vice, to produce a compact coil. The coils should be closed up with pliers (while hot) to give maximum heat. These points are capable of quickly burning the lettering used on house nameplates and similar work. They produce a textured effect (many parallel lines) and this is useful for producing feather effects on decoy birds. The coils can be filed smooth to get rid of the textured effect. Provided that the removal of metal does not weaken the point too much or cut through it, points can be filed and cut as much as you like to produce special shapes and effects. Thinning down the end of any point will concentrate the heat in that area and make the point more efficient. It will also take less current from the power unit and the handle will run cooler.

Because the folding or coiling up process gives more electrical resistance, thicker wire can be used for these points without overloading the machine.

A large area of contact with the wood is required for efficient shading. A spoon point can be used as a standard point or can be hammered out flat on a hard metal anvil such as the head of a hammer held in a vice. If necessary any sharp edges can be removed by rubbing on abrasive paper.

A useful point for fast shading of large areas is a heavy gauge coiled point, as previously described, which has been filed or ground smooth. This takes skill to make but is worth the effort. A smoother surface can be given to any point by polishing with very fine abrasive. A polished point is an advantage because it picks up less tar and ash from the wood.

Small brands can be shaped from wire and used for repeat decoration. These are formed by using small pointed pliers and must be accurately made so that the whole of the pattern touches evenly in use. 23 S.W.G. wire is needed for rigidity.

These points have been hammered flat while hot and then cut or folded over to give a straight edge at the tip. They can be made slightly angled to left or right for use in the same way as calligraphy pens. They can be filed to the exact width required.